The Death of Music Journalism

In stock (can be backordered)

Simon Sweetman – blogger, reviewer, podcaster, and author of On Song: Stories Behind New Zealand’s Pop Classics – releases his first poetry collection, The Death of Music Journalism. Simon’s been writing poems since he was first listening to bands on his Walkman, but then he started sharing them via social media and open mic nights. Word got around and he was a sleeper hit at LitCrawl’s Lit-Sync For Your Life and the 2020 Variety for Fierys.

Marking a pivot from the razor-sharp and sometimes controversial music writing he is best known for, Simon’s collection is as wide-ranging as his career to date. He writes about late-night encounters on the phone with rock stars, hanging out as a student in Wellington flats, the simplicity of time spent with family and the unpredictable life of a freelance music reviewer, and what happens when these things occasionally intersect. A natural storyteller whose poetry is filled with characters both famous and ordinary, this eagerly awaited collection is unpredictable, anarchic, playful and surprisingly heartfelt. 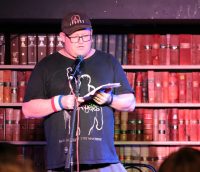 Simon Sweetman is a Wellington-based writer and broadcaster. He hosts a weekly podcast and blogs every day at offthetracks.co.nz as well as providing comment for RNZ. Back when there was music journalism he wrote for many of the country’s papers, magazines and websites as well as talking on radio and TV. Before all of that he wrote poetry. And is writing it still. The Death of Music Journalism is his second book and first volume of poems. He lives at home, watching horror movies, walking the dog and photographing road cones. His wife Katy and son Oscar are the loves of his life.