“I would like to be able to say, as my uncle Colin Webster-Watson often said, ‘Non, Je ne regrette rien.’ But I would be lying. There are a number of things I have done in my life I would love to have the chance to go back and undo. But I must accept that even the mistakes I have made are now part of who I am – they cannot be denied.”

Born in Hamilton in 1950 with a penchant for drama, Anne Manchester was perplexed by her remote mother and frustrated by the strictures of a post-war upbringing. She launched into university life at full tilt, demonstrating against the Vietnam War, waitressing in Suzy’s Coffee Lounge, losing her virginity to a gay man, taking part in university revues with Roger Hall and, despite her feminist beliefs, found herself crowned Miss Victoria University of Wellington.

Anne began work as a film editor and took off on her OE, bringing an English husband home with her. They moved into a cottage in Eastbourne, where Anne has lived ever since, through the raising of two firecracker sons and the loss of one through a tragic accident, an unstinting passion for theatre, a controversial role as co-editor of Kai Tiaki Nursing New Zealand, divorce, remarriage and the joys of becoming a grandmother.

Memory Stick is the story of a passionate woman living in the thick of things over seventy years of societal and cultural change, and weathering her share of loss, heartbreak and mistakes with courage and chutzpah. Written with a journalist’s flair, it’s a lively and entertaining read. 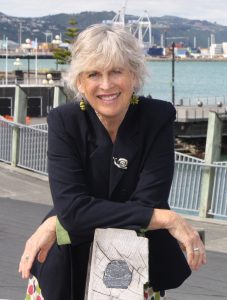 Anne Manchester is a writer and editor who lives beside the sea in Eastbourne with her husband, Sandy. She’s co-editor of Kai Tiaki Nursing New Zealand and Eastbourne: An Anthology, and has written two children’s books. She enjoys performing in community theatre, tramping Wellington’s hills, cycling and being a grandmother.

To read the first chapter, click the thumbnail below: