Fragments from an Infinite Catalogue

A vivid and eclectic collection of words and images by a scientist and artist who is fascinated by language.

Fragments from an Infinite Catalogue is a vivid and eclectic collection of words and images by a scientist and artist who is fascinated by language. John Tāne Christeller began writing poems to explain and extend the screenprints and woodblocks he was making, and found it a natural form of storytelling, going on to write in te reo and translating his poems into a variety of languages.

He writes of fable and fabrication, the game of cricket and the pulse of cicadas, the lifespan of geese and the loss of a mother; here are love songs and eulogies and stories told by children, and work that carefully measures the value of things, including the limits of art and memory and the vitality of the environment
that drew the poet to science. 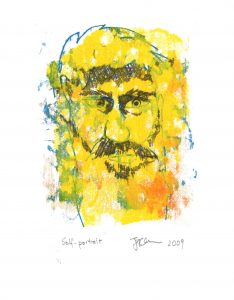 John Tāne Christeller grew up in Upper Hutt. His mother, Flora, was a pioneer potter and his father sang professionally, but while John made art for pleasure, science became his career. He worked for DSIR, and researched plants and insects in Japan. He went on to learn te reo at Te Wānanga o Aotearoa and Patu Te Taniwha. John lives in Palmerston North with his wife, Donna.